It’s been over twenty-five years since the 1991 landmark posthumous retrospective exhibition of Mor Faye’s work at Galerie 39 in Dakar, Senegal, and subsequent participation  in  “Fusion: West African Artists at the Venice Biennial” exhibition organized by the Museum for African Art, New York in 1993  that helped introduce his work to wider audiences around the world – this was a period  when almost no one was familiar with his work or knew that Africa even had something called contemporary culture for that matter. Much has changed since then, and this exhibition allows us to re-engage with the works of Mor Faye, albeit, with fresh eyes,  in the context of new realities surrounding the growing awareness of contemporary African art as well as the realization that histories of Modernism are constantly changing as its global breadth and local particularities are revealed.  Also, Dakar, the artist’s city of birth, continues to provide a vital platform for contemporary art in the African continent and its diaspora since the inception of Dak’art: Biennial of contemporary African art in 1992. It is the longest running grand-scale art event in Africa.
Mor Faye (1947-1984) was a versatile and complex artist whose ability to express a vivid interior existence while simultaneously opening up to some of the larger issues of our time was reflected consistently throughout his career. He had been on a restless intellectual and artistic quest since the age of fourteen when he began studying art under the renowned modernist Iba Ndiaye at the Ecoles des Beaux Arts de Dakar where he graduated in 1964. He then went on to earn a graduate degree in art education in 1966. Like most of his contemporaries at the Ecole de Dakar, he absorbed the tenets of Negritude cultural ideology espoused by President Leopold Sedar Senghor - Senegal’s poet and cultural theorist - becoming one of its leading light, and participated in the 1966 First World Festival of Negro Arts in Dakar at age 19. He was a special artist, gifted and tortured by a delicate sensibility and internal demons.
Despite his much publicized battle with mental illness and intermittent hospitalization, he remained philosophically and stylistically an internationalist whose work reflected his integrative approach to life and art. And as rightly stated by Christa Clarke in her insightful catalogue essay accompanying his solo exhibition at the World Bank, Washington DC in 1997: As an artist, Mor Faye absorbed and engaged the outside world, drawing from a multitude of sources yet claiming allegiance to none. Rather than the inward-focused images of a solitary recluse, Faye’s art connects personal experience to the larger world, revealing a multi-layered reality. His works are rich in meanings as well as metaphors, they transform observed reality and yet, remain uninterested in creating a mere description of this reality, giving priority instead to the representation of the ideal.
Since his death in 1984 at the age of 37, Mor Faye’s reputation as a troubled artistic genius has reached mythic proportions. A prolific artist, he lived a short and very productive life, and left behind a rich body of work that will help liberate as well as enrich contemporary thinking in Africa. His work encourages us to embrace a more expansive definition of modernity. Finally, it is quite fitting that this exhibition coincides with the 25th anniversary of Skoto Gallery, a space founded to showcase the very best of contemporary African art to the New York art world. We invite our audience to join us in celebrating the magic of Mor Faye’s art.
Skoto Aghahowa
New York, December 2016 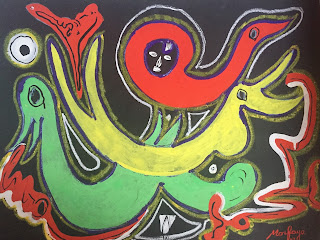 Posted by Bara Diokhane at 3:50 AM